How many punctuation dashes do you know? Most people will be familiar with the hyphen, however, did you know that there are actually three of this type of punctuation? The hyphen, the en dash and the em dash.

These three similar marks are actually used for different reasons, and often incorrectly I might add! Some may think it unimportant, however, for the pedantic grammar lovers – it is the difference between right and wrong!

So, here is a brief overview of the three different dashes:

This is normally used for linking parts of words, especially compound words such as ‘well-being’. The other main use is word division (if a word is split across two lines). Most common situations to hyphenate are when a word is conventionally hyphenated, when using a compound adjective before the word it modifies, and for clarity. The exception to this rule is when the compound adjective begins with an adverb ending in -ly. The prefixes ‘ex’ and ‘self’ are always followed by hyphens whilst others such as ‘re’, ‘anti’ and ‘un’ depend on the word. They should also be used when referring to ages of time spans (seven-year-old girl).

This is used mainly to indicate three things: range of numbers (Henry VIII, 1509 – 1547), scores (Ireland won 4 – 0), and conflict or connection (eg. Liberal – conservative). It can also link words in compound adjectives that include open compound or proper nouns, and in UK English it is sometimes used instead of parentheses or commas. It is also typically expressed with spaces on either side – like this.

The em dash is perhaps the most versatile punctuation mark. Depending on the context, the em dash can take the place of commas, parentheses, or colons, and in each case to slightly different effect. Whilst the en dash takes on this form in UK English, the em dash is more regularly used in US English. It is normally expressed with no spaces on either side—like this.

And there we go, a very brief summary of these three similar-yet-different punctuation marks. For more information, please feel free to get in touch! 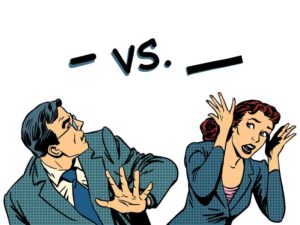